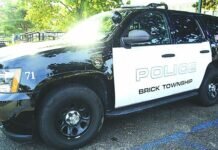 BRICK TOWNSHIP — A Manalapan man was arrested on shoplifting and drug charges on Friday after the Brick Township Police Department’s Street Crime Unit [SCU] discovered him sleeping in a vehicle outside of Quick Check on Route 70.

The SCU was conducting surveillance when the officers observed the man at approximately 11 p.m. Upon investigation, the detectives identified the man as 32-year-old Christian Vatovec, police say.

After searching Mr. Vatovec’s vehicle, authorities said they found a large amount of methamphetamine inside the vehicle. Detectives also located Xanax, Suboxone and a hypodermic syringe, according to a police press release.

SCU detectives located several shoplifting tools including devices used to remove security tags on merchandise, authorities said. In addition to the drugs and the shoplifting tools, authorities found many electronics including phones, laptops, electric scooters and drones, which police believe to be stolen from various departments, according to the press release.

Detectives are still investigating the origins of the alleged stolen items, police said.

Reports say that Mr. Vatovec has been arrested for shoplifting and selling stolen items in the past.

Vatovec’s charges were placed on a warrant and he was lodged in Ocean County Jail, police said.