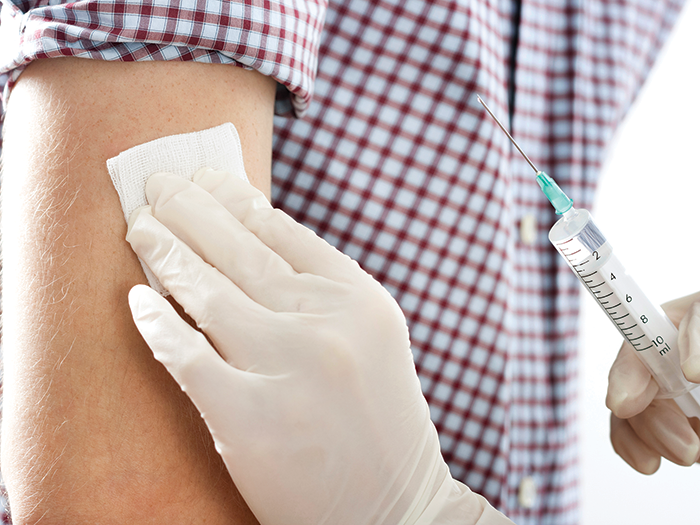 MONMOUTH COUNTY — As police officers are now allowed to receive their first dose of the COVID-19 vaccine, local police chiefs have tried to set the example for those they manage by getting their first jab of the vaccine.

Since state officials announced that sworn law-enforcement officers would be given the green light to receive the vaccine last Tuesday, officers at some departments have been encouraged to receive their first shot.

“I am highly encouraging them to get the vaccine. It’s really their choice; I can’t mandate that they get it,” Belmar Chief of Police Tina Scott told The Coast Star on Monday, adding that in the past 10 months, some of the department’s 23 officers had contracted the virus and have since recovered. Around five officers have gotten their first jab of the vaccine, others have scheduled appointments to receive it and some are still debating whether or not they will get it.

Leading by example, she said she was scheduled to receive her first dose of the vaccine on Tuesday.

Chief Scott is not the only chief of police who said they wanted to lead by example. In neighboring Spring Lake, Police Chief Edward M. Kerr said that he was “extremely happy” that police officers were given the green light to receive their vaccinations. He received his first dose on Friday at Jersey Shore University Medical Center in Neptune on Friday. He expects to receive his second dose in early February.

Most officers, he said, have received their first dose or will receive it in the coming days. “First, I would like to publicly thank the men and women of the Spring Lake Police Department for the outstanding job they have done since the start of this pandemic,” he told The Coast Star on Tuesday. “They are all true heroes who always go above and beyond the call of duty to help keep our residents and visitors safe. Our police officers respond to, and are first to arrive at, all first aid and fire calls, which has put them at an increased risk of contracting the virus since day one of this pandemic.”

In Manasquan, Chief of Police Michael Bauer said he also received his first dose of the vaccine on Friday. Last week, his department received notifications from the New Jersey Department of Health and from the county on how to get the vaccine, which was passed on to officers.

“The only encouragement I have given the officer is if they have any questions to seek medical advice from their own physician so they could better understand the vaccine and if it is right for them,” Chief Bauer said.

Spring Lake Heights Police Chief Ed Gunnell said he passed on to officers notifications from the New Jersey Department of Health, as well as of the Police Benevolent Association 50, on vaccine availability, appointment times and locations.

Last week, Gov. Phil Murphy announced that sworn police officers and firefighters would be the first group in the state’s 1B category to receive the COVID-19 vaccine.

According to Judith Persichilli, the commissioner of the New Jersey Department of Health, there are around 50,000 police officers and firefighters in the state.